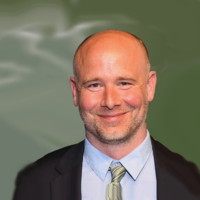 Ahead of his launch event on 7 July 2021 at the UN Global Summit on AI for Good, Philip Stier is interviewed for an Oxford Science Blog about his research into clouds and climate change.

Philip explains that his interest in the environment stretches back to his childhood, when he would ride his bike to school because he was already worried about the pollution from cars. His interest in science led him to study the physics of climate processes and then begin to focus his research on aerosols (suspended particles) in the atmosphere.

Clouds, Professor Stier says, are scientifically very important in understanding climate change and are critical to research and solutions to the crisis.

He explains, ‘There are natural aerosols in the atmosphere, for instance pollen, but there are other types of aerosols, man-made aerosols, caused by pollution. They modify the climate directly [by scattering and absorption of radiation] and affect clouds [which, in turn, affect the environment and climate]. This is because each cloud droplet in the atmosphere forms on an aerosol particle.’

These ‘polluted clouds’, which contain more aerosols and hence more cloud droplets, are brighter, says Professor Stier, ‘reflecting more sunlight back to space and therefore cooling the Earth’. So, while they may be purveyors of pollution, aerosols partly shield us from the impact of climate change.