A new book by Fredi Otto on the new science of assessing the impacts of human actions on extreme weather events has been described as "groundbreaking" and having "profound impacts, both today and for the future of humankind." 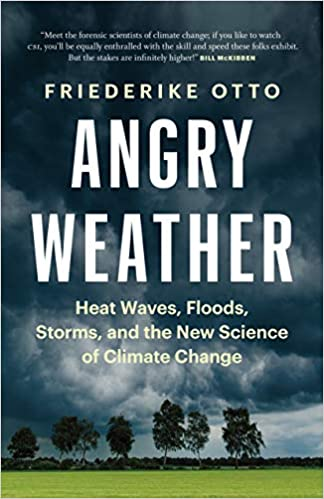 Angry Weather: Heat Waves, Floods, Storms, and the New Science of Climate Change is an evidence-filled historic account of weather through the ages that is anchored in a gripping, day-by-day story of Hurricane Harvey, which caused over a hundred deaths and $125 billion in damage in 2017. Through her account of the hurricane unfolding, Otto reveals how attribution science works in real time, and determines that Harvey’s terrifying floods were three times more likely to occur due to human-induced climate change.

Attribution science is a revolutionary method pioneered by Otto, that is able to link heatwaves, droughts and hurricanes to human-induced global warming. Along with the vast body of data Otto has compiled to present the case for a changing climate, she argues that science needs to go beyond those “large-scale averages” to consider the effects of climate change on a storm-by-storm, drought-by-drought basis. She also considers the role of corporations and governments in exacerbating extreme weather events, and warns that “If governments don’t do their job and don’t do enough to put a stop to climate change, then courts can remind them of their purpose.”

Angry Weather is published by Greystone Books and was released on 15 September 2020.