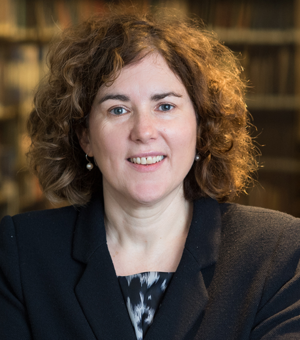 Catríona Cannon became Deputy Librarian and Keeper of Collections in December 2014. Before that she was Associate Director, from June 2011, having joined the Bodleian Libraries in January 2010 as Assistant Director. From 2005 to 2010 she was Head of Information Resources and Bibliographic Services Manager, Information Services and Systems at King's College London. She previously held posts in a variety of different higher education institutions in the UK and Ireland.

Having graduated from Trinity College Dublin in French and Latin with First Class Honours in 1990, she went on to complete an MPhil in European Literature at the University of Oxford in 1992 and an MA in Library and Information Studies from University College London in 1995. She became a member of the Chartered Institute of Library and Information Professionals (CILIP) in 1997.

In her current role, Catríona deputizes for Bodley's Librarian and has leadership and management accountability for libraries and learning spaces, special collections, the Libraries' research unit for heritage science, the public engagement programme, information skills training and liaison with the academic community. She is Co-Investigator of 'Opening the Edgeworth papers' and was Principal Investigator for the Centre for Digital Scholarship research project.

As the Official Fellow for GLAM Liaison, Catríona is especially passionate about promoting initiatives and relations that will harness and enhance the mutual benefits of partnership with Reuben College. These include improved services, shared facilities, and knowledge exchange around specialist skills, public engagement and open science.